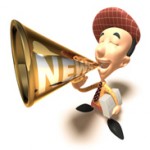 On April 2, the SEC announced new guidance on the use of social media to disseminate corporate information, refreshingly acknowledging and embracing the brave new media world we live in. The report explains in plain English that companies may use social media outlets such as Facebook and Twitter to announce material information in compliance with Regulation Fair Disclosure (Reg FD), so long as investors have been alerted about which outlets it will use.

The SEC’s new guidance was prompted by an SEC investigation into a Netflix communications debacle last summer, when CEO Reed Hastings used his personal Facebook page to announce very favorable content streaming numbers, driving Netflix’s stock price through the roof.  The tricky part was that this was the first time that Netflix had used Hastings’s personal Facebook page to announce company metrics, and that the information was not publicly disclosed elsewhere.   Of course, Hastings created a modern-age text book example of the “selective disclosure” that Reg FD is meant to prevent.  No enforcement proceeding ensued, but the SEC clearly felt that there was a need for general guidance.  That guidance, when given earlier this month, was greeted with a lot of buzz, sadly mostly negative, almost all of it along the lines of “too little, too late.”

Of course that made me very curious about the perspective of an all-star cast of Investor Relations and communications pros that were assembled on a panel on topic that I attended Wednesday.  Members of the panel, just to name a few, included Cathy Baron Tamraz, CEO/Chairwoman of Business Wire, Michael Nowlan, President and CEO of Marketwired, Vinny Jindal, CEO and Co-Founder of Stockr, Inc.  and representatives of NASDAQ and NYSE/Euronext.

This is what I took away from it:

In conclusion: The SEC gives you, my dear reader, the choice of media channels to reach your constituents, it even encourages the use of newer forms.  Don’t over-complicate it, but be disciplined.  A last thought:  I know that many of you are looking for more specifics from the SEC, a bright line test.  I don’t think it is coming, and that might be a good thing.  The world around us is changing in a New York minute, and right now you are free to choose what fits your needs and adapt it as the need arises.