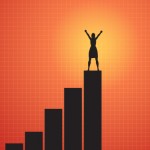 Sheryl Sandberg’s book “Lean In” came out earlier this week with what must have been the greatest fanfare of any book launch in history. If you have not followed it, Google it or check out this New York Times article, and you’ll see.  I read the book, or rather, I tried.  To be honest, I skimmed it. I am maxed out on the “can women have it all” discussion, have been since — let’s say the late nineties?

Somehow it seems I have been shielded from the enormity of the issue, maybe because I grew up in a 100% gender-blind family in which my siblings and I, two girls, two boys, were expected to make our way, equally, or maybe because I moved on before the issue became an issue, or maybe because I was part of the C-Suite after that.  Now I do my own thing anyhow.  It’s hard to ignore the stats though, laid out in detail in the beginning of the book. They paint a pretty depressing picture about how far from equality we still really are.

What really drew me in, though, was Sheryl’s engaging, honest and personal account of the many ways how women hold themselves back, be it self-doubt, insecurity, the fear of being domineering, overreaching, showing off, being not enough or too little.

Two of these themes resonated with me in particular as they hit very close to home.

The first one is the incessant need to be liked, this constant desire to be perfect, to be everything to all people.  Besides the fact that it is impossible, it’s exhausting. So much good energy is wasted in trying, failing, feeling miserable because of failing, and so on.  At some point I decided to let go and to choose the values that I believe in: respect, honesty and maybe most importantly, fairness, and to live according to them.  Did everyone like it? Hell no!  But it gave me space to be authentic and closer to “making it all” in a holistic, non-traditional kind of way.

The second one is fear.  Fear has been a common thread throughout my career, fear of the unknown, of not being liked, of not fitting in, of putting myself out there, of being vulnerable or of failure.  The list is endless.  But I did whatever I had to do anyhow, because in my mind the infinite possibilities of trying outweighed by far the worst case I was imagining.  The one thing I know for sure is that missed chances are the worst that can happen to me in life.  I really liked the way Sheryl put it in the book: imagine what you would do if you were not afraid and then do it. Now that’s great advice if you ask me. Go for it.  Have a great weekend.

Eckerle Law offers legal advice in a variety of transactional and regulatory matters serving your business law needs. If your company would like to strengthen its business practices, please contact us today so we can leverage our experience to create real-life business and legal solutions to help your business thrive.