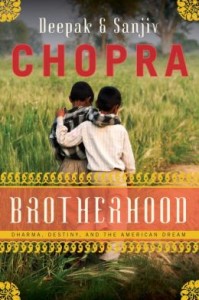 I went to hear Deepak and Sanjiv Chopra speak at the Hudson Union Society the other week. They were promoting their new book, “Brotherhood –Dharma, Destiny, and the American Dream.”

It was captivating to hear their honest, at times intimate, account of growing up in India, their childhood deeply shaped by their father, one of the most prominent physicians of his time, of their life as immigrants in the United States, both reaching remarkable acclaim in their field, medicine, and of their struggles along the way.

I really went to see Deepak Chopra whose philosophy and approach to healing I have found fascinating after reading his books “The Soul of Leadership” and “Ageless Body, Timeless Mind” way back.  What I ended up captivated by, though, was the juxtaposition of the brothers’ paths.

At first, they seemed the embodiment of two radically different approaches to dis-ease and healing.  Sanjiv, climbing the ladder of the American medical establishment at Harvard medical school.  Deepak, shunning it, leaving his career to focus first on Ayurveda, the thousands of years’ old Indian medical tradition, and then to blaze his own trail with the mind-body approach to healing.   One, Sanjiv, regarding the body as a machine, an accumulation of moving parts that wear out over time, the other, Deepak, as energy and intelligence that transcends matter.

At second glance, it struck me that these two brothers might really by the symbol of the state of medicine at this time: the exciting time of the convergence of the seemingly irreconcilable that is happening in front of our very eyes, of the breakthrough of integrative/functional medicine.

There was a rare glimpse of how much courage it must have taken Deepak to throw away his thriving traditional medical practice to practice what was then considered “folk” medicine.  A first generation immigrant!

When Sanjiv ended the talk with a quote from philosopher and theologian Soren Kierkegard, it was clear that it is the essence of their incredible story.  It goes like this: “To dare is to lose one’s footing momentarily.  Not to dare is to lose oneself.”

And dared they have.

Have a great weekend!